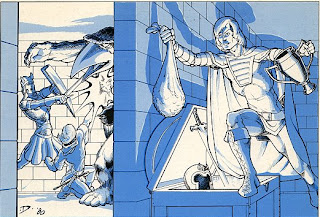 So my wife and I went up north a bit to spend the weekend away for her birthday. Yeah, yeah, I know...2-1/2 hours up north in Michigan, isn't much of a vacation, but hey! - we're in a freakin' recession around here, ya'know?

She digs casinos and we wanted to get away together, even it was just for a little while, just a little ways up the highway. We usually make a yearly jaunt to Vegas (stay with relatives) but this would have to do for the casino trip fix this year. We had a blast, but that's not the subject of this post. No way I'm draggin our personal alone times into this mess...ha!

Anyway, I scouted a couple local game shops in the area in which we were staying, and before we left to come back home, we stopped by to see if they had anything cool. They did.

I snagged a few modules, some dungeon tiles/maps, and some loose minis from the cheap/promo bin. All good. Just thought I'd share my findings with the rest of you, my fellow looters:

B10 Night's Dark Terror - a Basic D&D mod that was missing from my pile of nerdliness - finally got it...sa-weet! 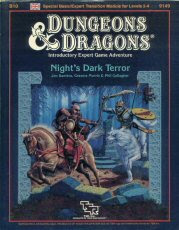 UK4 When a Star Falls - an old AD&D mod from across the pond - I have most of the UK series, but not this one...until now. 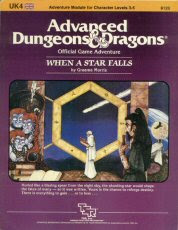 Against the Giants: The Liberation of Geoff - silver anniversary release of the old faves G1-2-3, with some new encounters mixed in to make a full campaign. Seen this one around a lot, but it was ridiculously cheap, so I snagged it. Yay! 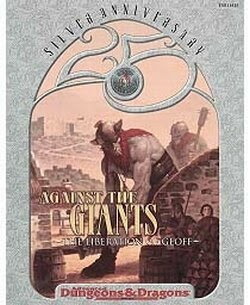 GameMastery Map Pack: City - I already have tons of WotC's Dungeon Tiles packs, a stack of various fold-out maps and such, and a Chessex Battlemat, but these were cheap (the store owner just wanted to sell something, I think), so I figured WTF, I'll try them sometime. 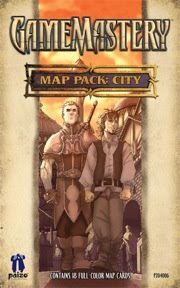 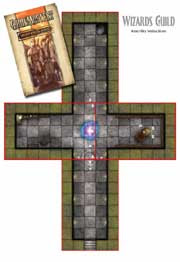 And then there's the various loose minis. There are more, but these are the ones I can recall ATM:

Derro - love these little guys - plus the UK4 mod above has some in it....cool! I should have bought more of them.

Giant Frog - I'd like to see if I can make this guy work as a Beastmaster Ranger's Beast Companion (4e Martial Power Book Ranger class style). I mean I can't help but think the eyes and tounge just jump out and say "Hi, I am Dar's bud. Ribbit!" 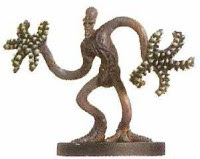 Ethereal Filcher - "nevah heard of it....next!" - I think I need to go dig up some books and look this bad boy up...drawing a blank on him...err...it. Cool multiple attacks possibilities though. 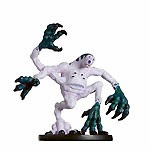 Dolgrim - talk about multiple attacks! My son is gonna luuuuuuuuv this one, with his imaginative flurries he likes to bust out in our EZ-rules mini battles. I can hear it now: "Ok Daddy, my guy's gonna bash you with this pointy ball club thing, stab you with this spear, shoot you with this little crossbow, smack you with this spiky shield, kick you in the head with both feet, and bite your face off...TWICE!"

So in summary, we may have "donated" to the Casino, but we really did have a blast together, just getting away from RL for a little bit. Plus, ya gotta love a little loot run thrown in for good measure.

Night's Dark Terror is a huge score on its own. That thing is really hard to find, and it's an AWESOME module. You smart to grab it.

I am also a big fan of When A Star Falls, but I am a TSR UK fanboy in general.

Yeah, agreed. The guy at that shop (non-owner) wasn't sure how much to charge me for it. It was not marked. Good thing.

My only thing on the UK mods of old, is the artwork. I know it's weird, but I just prefer most of the US art in those old mods. Other than that I think they are great additions to the module array of "back in...."

"Etherial Filchers" are from the original 3.0 Monster Manual, and pretty much do what it says on the tin - they blurp in from Teh Ethereal and grab delver's stuff, and hie it back to their lairs. Far as I can tell they're one of those "oh crap I didn't mean to give that item out it's too overpowered what the hell do I do now" type beasts.

My only thing on the UK mods of old, is the artwork. I know it's weird, but I just prefer most of the US art in those old mods.

My feelings are exactly opposite, but hey, to each his own.

Ahh...cool. Well, unless you're the owner of the "too cool" item that gets nabbed.

Thanks for the info!

My feelings are exactly opposite, but hey, to each his own.

For sure, bud. Heck most people have likes/dislikes between the various artists on the US stuff as well. I always liked Jeff Dee's work, some other folks think it's too "superheroish/comicbookish." But I also really dig Roslof, Willingham, Holloway, and especially Otus. So I guess I'm pretty open.

I don't dislike the UK mods' art, I just like the US stuff a little more. Weird patriotism, I guess....ha!

Yeah, thanx! I did feel a bit lucky when I spotted the B10 on the shelf. It was the only old-school mod in that particular shop...weird.

Ah well, not a shrink-wrapped, NIB specimen, for sure, but it's good enough for me. ;>]

Cool! I live in Mississippi, and strangely enough, there is (or was prior to Katrina - not sure if it's still there now) an old school gaming shop just down the street from the casinos there. I used to score tons of great stuff. It was like time had stopped there sometime in the early nineties.

Hey this is an awesome blog! How come I've never found you before?! Darnit :D

I'm with blizack - Night's Dark Terror is a terrific find. It's arguably one of the best adventures ever made.

Those are the coolest shops to come across, aren't they? One of the local hobby/gaming shops around here sadly went out of business last year. They used to carry a ton of new stuff that was tough to find locally, and some old stuff that they would get in as trades, I guess. Thing is when they had their big "everything must go" sale, I think they emptied some storage bins in the backroom, because they had tons of old RPG stuff that was never out on the shelves before in the store. I scored a nice bunch that day (D&D, Top Secret, lead minis, Judges Guild, etc)...all at crazy low prices.

Anyway here's hoping your old loot run is still there for ya when you visit Mississippi. Cheers!

Thanks man! Means a lot to hear folks like my ramblings.

I'm glad to hear the praise for module B10, too. I have never run thru that mod before (player or DM), so someday when the time is right, I guess I will get to see just how cool it really is.

Glad you found my blog. Stop back by, bro.