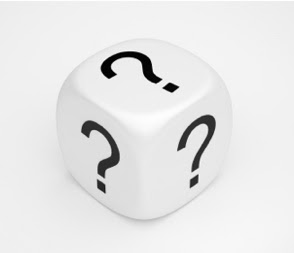 So, I recently added to my (embarrassingly too large) pile of Gamescience dice. I just can't help myself, really. It's quite sad.

I snagged a few packs from a FLGS, as I noticed that they were new additions to the front counter glass showcase. I left the shop with a lighter wallet, but a heavier dice bag, as I just couldn't say no to any of these bad boys: all 7-dice poly sets in the colors Coal Black, Pumpkin Orange, Seashell White, and Peridot (gem). 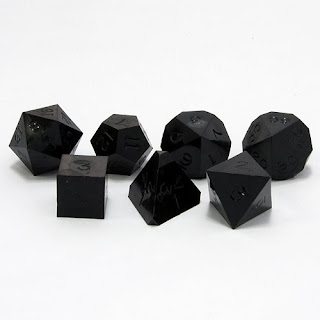 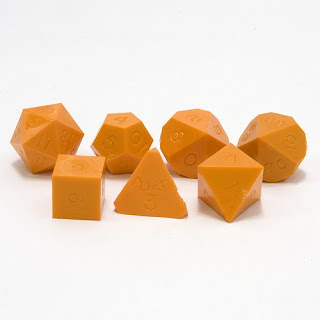 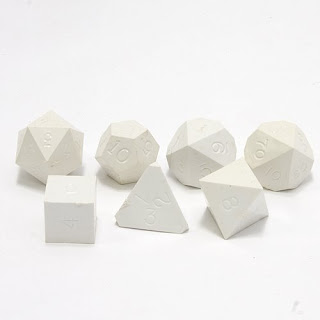 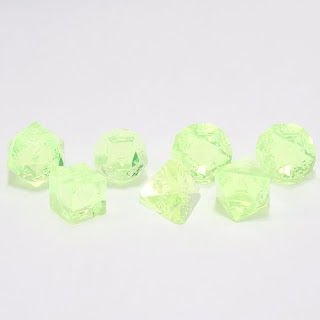 When I got home, I promptly broke out the trusty Pilot ultra-fine black permanent marker and began inking them. BTW, for a real nice personal procedure on inking GS dice, check out Jeff Rients' post on the subject. Well except for the periodot (gem) set. That one was destined for the white paint pen treatment.

Anyway, I usually set out the whole set and just go down the row, inking a single digit on a single die, and then moving on to the next in line, to allow the ink to dry on the previous die. For some strange reason this time I started with the seashell white set, and more specifically the 00-90 d10. I inked the whole die (mostly I guess because I had some downtime on that die, as I was playing a bit with my kids during the inking exercise) and then grabbed the d6. 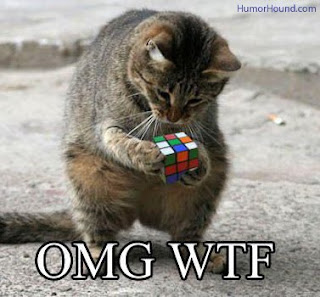 Truth be told, it didn't take that long to figure it out. But I must say I was a bit perplexed, as I have never had any issue with any Gamescience dice like this in the past. Upon further investigation (hehe), I noted that this d6 was numbered 2, 2, 3, 4, 5, 5. Weird.

So it's not really a cheater dice (not that I would ever use such a vile thing!). I mean yeah, it will never role a measily 1 damage. Nor will it ever hinder the "3d6 in-order" hero creation process in the worst of ways. But...it also will never max out with max damage. Nor will it ever allow a natural 18 ability score (cuz we all normally get those all the time, right?).

Have any of you seen this kind of mismark? Especially on such a precision-heavy (wow, that sounds weirdly weighted) product as Gamescience dice?

I know I haven't. I called the shop to let the owner know, and he said there would be no problem exchanging them. I say them, because this was the case with the d6 in both the seashell white and the pumpin sets. The black set and the peridot set bot had normally marked d6s.

I also informed the shop owner that the only issue I feared he may have with the return/exchange was the fact that I had already inked the 00-90 d10 in the white set, before I even noticed the flawed d6. He reassured me that he had no problem with it and he would take care of it for me, no questions. Coolness.

I kinda wonder if he secretly has a role in mind for the defective d6s. Maybe he's tired of doing the math on a 1d4+1. These bad boys look to be the perfect solution for that 2-5 range...in a mutant-bell-curve sorta way. Hhhmmnn...... 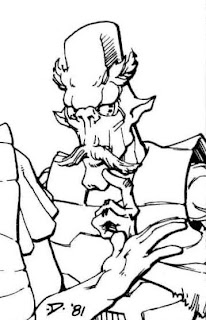 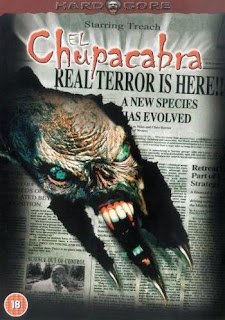 Looks like another el Chupacabra has been found...allegedly. Weird how a single entity like the Chupacabra can be found (dead) again, right? 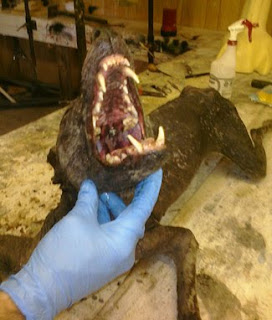 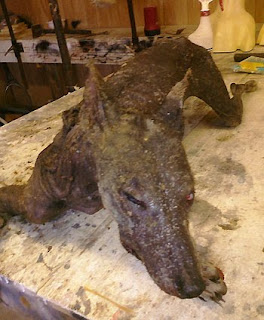 Well, it's certainly not the first time we've seen Mutant Future-esque canines like this. In fact these seem to crop up all the time, but this one just cracked me up a little more than usual. Here's another story of some lady who found one of these close-shaven, anti-dentite doggies, pretty much exactly 2 years ago. Do you see a trend?

That 2007 finding was blasted as a hoax (as it should be) in articles like this one. Ah well, good times regardless...ha! 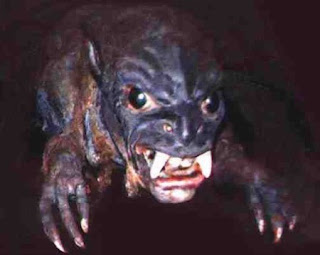