Painting minis again: the kiddies join in too! 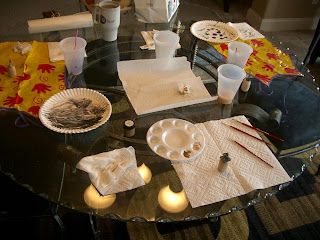 Well, it's been a while. I almost forgot how to do this posting thing. Looks like a month has flown by since my last one. I guess I'll blame it on summer vacations and such...why not? This is my first summer since beginning to blog, so maybe it's somewhat normal. Hitting some of my favorite blogs during this seasonal break of sorts (remotely usually via my phone), I do in fact see some that have slowed down quite a bit, while other diehards have kept up their usual impressive pace.

At any rate, I have previously noted that I wished to get back to painting minis. I haven't done so since the mid '80s! I have shown some pics of a few of my old Grenadier, Ral Partha, Citadel, and TSR lead minis from that era, but other than those, I really don't recall dipping a brush and slapping the paint on any of them since then.

I dug through some of my old painting gear, and as it turns out it almost all pretty much useless at this point. Paints have dried up and brushes have become mutilated. It was time to update my supplies and have a go.

I snagged some Reaper paints at a local gaming shop, then stopped by a local art store for some brushes, palettes, knives, sticky-stuff, primers, and finishes. I already have tons of minis to paint - tons of old lead figs, some newer lead-free ones, and some plastic guys too.

Now my son has really taken an interest in minis, and even my little girl has been known to join in some games, so I knew they would want to make a mess... err... do some painting too. So I set up the kitchen table, because that's just where you're supposed to gaming and gaming related stuff (IMO), and we all sat down to paint us some minis. 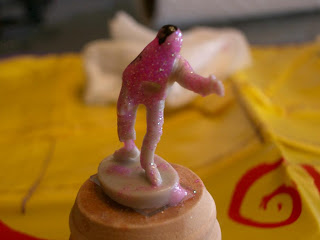 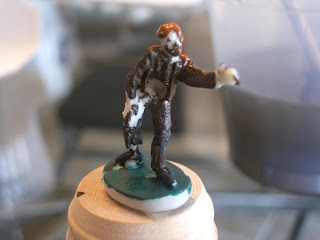 I figured I'd start them out on the zombies, mainly because I have so many of them (cheap and great for undead minions and mobs in general), so that if they totally hosed them up, they could just grab another and hit it again.

Well, my daughter spent somewhere around a whopping 5 minutes in her miniature painting career and retired from the hobby...for now, at least. Best part about her supplies - the pink glitter that she absolutely insisted on using is actually your basic glitter glue, which actually turned out perfect to sum up a 3 y.o.'s infatuation with princesses, Barbies, Littlest Pet Shop, etc. The artwork completely mirrored the artist in this case. Well that is, minus the whole undead, brain-eating thing.

However "the boys" stayed at it. My son's next attempt was a plastic Dwarf Crossbowman: 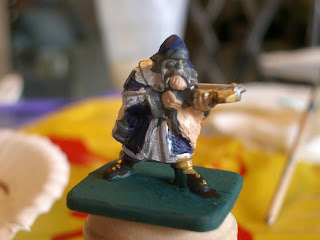 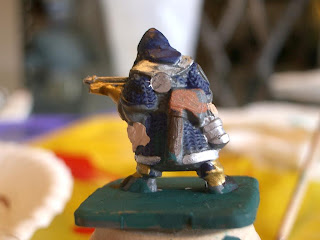 This fig is from that bunch of Dwarves from the Grenadier Fantasy Warriors game, as discussed in some comments of this post. I have bunches of these figs, as well as dwarf axemen, orcs, goblins, etc from that same game. They too are great for minions, or bigger groups of baddies, as well as good specimens for the kiddies to learn how to paint. Heck I even used one (a staff wielding dwarf) for one of my current 4e characters, a Dwarf Invoker - looks exactly the part for that guy. I'll post a pic or two of that mini. It was one of the first few I did in this return to painting minis endeavor. I just don't have the pics on me ATM. Ah well.

Although he chose the flesh color for the dude's beard, I'd have to say that for a 5 y.o.'s second attempt at painting a mini, he freakin' rocked the house! I am very, very proud of his work. He is too. Check him out modeling his masterpiece: 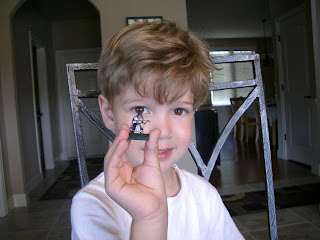 It was pretty funny when he asked across the table, "Daddy, what color are you using for your guy's face?" I replied a bit smart-@$$edly, "Uhmm....the face color. That one right there." He replied, as if nothing was strange about his choice, "Oh, I used that color for my guy's beard." Awesome. He did a great job on some of the details, like the hand-axe on the belt, the crossbow, sections of the armor, straps, etc. That face and beard swap is freakin' funky though...hehe.

As far as my own mini painting, the only one I have with me on this SD card is this Reaper Gnome: 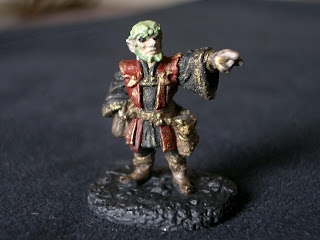 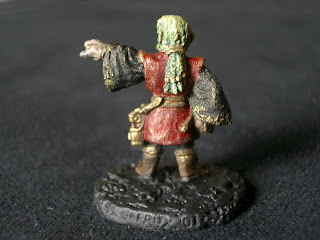 I needed a good gnome for another current 4e character I'm playing, a Gnome Illusionist Wizard. I couldn't find a good gnome caster mini from the WotC D&D mini sets, and this guy looked a lot like how I pictured my character, so I decided to paint him up and use him for those sessions. I know I didn't do a very good job on him, but I guess all things considered it actually turned out better than I expected. It really has been a looooooooong time since I did this....hehe. I went a little crazy with the gold dry-brushing, but after I accidentally got a little bit of it on his hair, I kinda liked the glitter look (thanks to my little girl's zombie influence?), and decided that since he worships Garl Glittergold, why the F not just sprinkle it all over him. And so there it is - an excuse... err... a reason for my messy dry-brushing techniques....cool. What say ye, Garl? 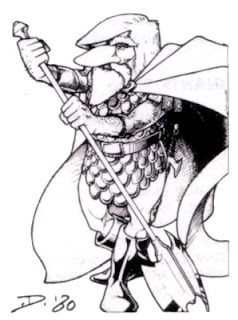 "Meh."
I'll try to collect the pics of the other figs we painted that day and the next, as some of them are quite interesting. My son made up his own version of washing and dry-brushing...with mixed results. I think he did some retouching on the crossbowman fig too, IIRC, so I'll post more pics of that one, if that's the case.

After feeling all good about myself for still having (some) skills, my wonderful wife served me up with this gem: "So which one did you paint and which one did Bobby paint?" And she was serious. 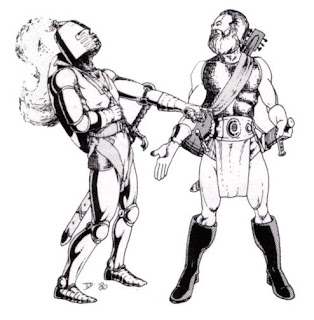