"The Keep on the Borderlands" redesigned by a 5 year old and 2 year old...sorta 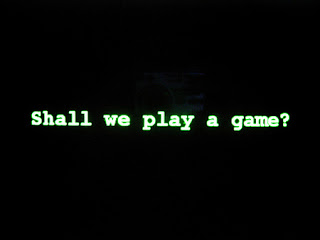 Well, as promised (and I consider it my son promising me that we'd play "that D&D game" again), we played that D&D game again last night. Now, keep in mind that "that D&D game" to a 5 year old boy and a 2 year old girl can mean anything from rolling dice and having our minis fight each other, to laying out dungeon tiles and seeing how cool they look. Last night we did all of that, and a little more. This post will focus on the "little more" portion. Let me explain...


Approximately 12 seconds after I walked into our house, after racing home from work yesterday evening, with a huge grin on his face, my son asked me:

"Daddy, do you remember what I asked you this morning?"

I then 1-upped him by adding:

"I also have another surprise for our game tonight. Do you remember that cool Battlemat that is rolled up in a tube, standing in the corner of the room? Well we're gonna use that too. And you get to draw whatever kind of dungeon you want on it. Cool?"

We both smiled wide and rushed off to the den/office to gather up some dice, minis, tiles, and the mat and markers. My daughter saw the flurry of 2 little boys (me included) rushing past her with all of this cool stuff and said "can I play?"

So we set it all up in the kitchen. Seriously is there really any more iconic a table to play D&D on, especially when your a kid, than the kitchen table? Nope. I unrolled the mat first to let it relax the rolled edges, and got out the markers. I figured for their first use of the map, we'd stick with the hex side. If they're gonna hose it up somehow, I'd prefer it not to be on the square grid. Still, I had to have a little pre-game discussion about how these are the only markers that we can use to write on the mat. Additionally, no pens, no pencils, no crayons, and especially "no permanent markers!....got it?!?!?" 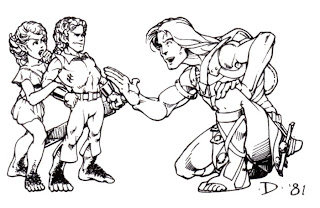 Once the formalities were done, I gave them free reign to draw whatever they wanted on the mat, while I got the rest of the stuff out. A few minutes later, when I looked back at how they were coming along, I was blown away. Check out what I saw through my "back in '81" glasses as a minimalist redesign of B2 The Keep on the Borderlands:

And Anna's version of the Caves of Chaos:

Here's a little clip of them explaining some of their awesome designs:

Now look, I know that I'm just being a proud Daddy, and that this really is just two kids doodling and having fun, but I really was surprised to see what they decided to draw.

His multiple rooms, along with room numbers, and some of the items and dudes he put in them, is freakin cool. OK, so a couple of the numbers are written backwards (he did write some of them upside down, so that is an excuse of sorts), but check out that top-hat-wearing, armless, snarling creature he put in the main room. Yikes! I wonder what it's stat block looks like...

When I asked him about that dude he explained "It's a guy walkin'. He's trying to get this way, but he doesn't know which way he's goin'." I should have asked him to make a Dungeoneering check, eh? Or just keep the old school flavor they had going there have the guy just poke around a bit with a 10' pole. That always works, right?

Now, Anna's design was bit more...organic. She kinda got on a theme there and ran with it. I called them "caves" - she corrected me, stating "dat's ovals." Okie-dokie.

Anyway, we populated the dungeons and I let them just explore a bit, roll some dice, and attack stuff. It would have been cool to actually run them through these things, in real encounters and such, but for this session, we kept it reaaaaal simple. Little sister doesn't have the patience no the time to play the way Bobby and I do. She's got appointments to keep, and things to do, ya'know?

Here's a couple shots of them duking it out:

It was a fatal strike! What was he, a minion?

Ah well, fatalities aside, fun was had by all. But mostly by me, and I never even rolled a single polyhedron! 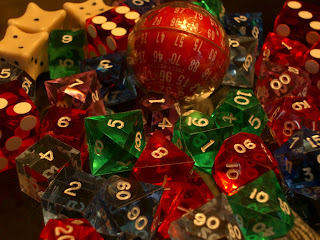 Hey thanks man. It was so much fun!

BTW, did you notice in the corner of the battlemat, I have a grouping of 10 orcs jammed into a 5x3 area. I couldn't help but laugh out loud when I piled them there, thinking of your recent post:

Awesome! This is seriously warming my heart. Your kids seem like sharp little critters and their drawings are brilliant!

I've known many people over the years that have stood by the belief that games like D&D are "far too complex" for younger children. In fact, that was a problem I ran into when I was about 7 and saw some D&D minis and books in a store. The teenager working there laughed and told me that I'm better off waiting until I was at least 13 or 14 to start playing D&D.

When I started teaching my nephews how to play, breaking it down to basics came natural. Yes, D&D is pretty rule intensive, but let's not forget that it's still made up of things all kids love; fighting monsters, finding treasure and letting your imagination run rampant.

I really love your approach to this. Some parents would be hammering rules into the poor kids until all the fun was sucked out of it, but you seem to be going with the flow your kids' natural curiosity and imagination. Well done.

You're really building some solid memories, here. I applaud you!

Genius! Makes me wish we had kids - thank you for sharing this, you have every right to be a proud dad!

That was great. My wife thinks she dodged a huge bullet when our daughter was born (as opposed to the son that I swore I was going to turn into a D&D geek).

@lokipan
Dodged a bullet!?! You kidding me?

I've got two daughters and they're both enthusiasts. In fact, my wife, who's put up with my gaming for roughly 20 years and has only played one time in that span, has decided to get in on the gaming goodness.

What a hoot! Aint kids great man? Any time you can sit down with your kids and do something as creative as that you're ALL winning.

I love hearing that other folks see the magic of this whole thing too. It is amazing.

Too young to use you imagination? Bah! Now, don't get me wrong...I do cut the rules down a ton...almost to none. But it's still fun, and they are pretty young for it.

You should go on a quest to hunt down that dork back in the day who told you that you were too young for D&D...and then slap a Belt of Gender Changing on him.

BTW, I think I mentioned before (albeit wayyyy too late) that you Reis were my inspiration to even try this with them so soon, after reading you post on playing some with your nephew and his buds...the picnic table one. So thanx again for the idea!

Thanx bud! I am very proud of them, for many many things. This one was just a serious "geekdad" session for me.

And I sincerely hope that someday you experience this same joy. It is an amazing thing.

Heck, my little girl there beat the smack outta me and my son in a game of Crossbows & Catapults, late last year. She's a natural born stone-cold killah!

For sure, bro...for sure. We continued that night with a little Dungeon Tile fun too. I will post some of those pics soon. My son got waaaaaaaayyyyyy into that too. Ha! I got him...I got him hooked real good!

But what's even more fun (or funner) is to watch the game the kids make up when you decide to leave them entirely to their own imaginations. Might make for an interesting and unique dungeon module..entirely kid-designed.

OMG dude, that is classic! I hope you don't mind, but I'm gonna totally steal that line for a near future posting here, ok? I'll credit ya, no worries there.

Yeah they almost did it right there. I swear when I looked over and saw her caves ("of Chaos") and the rooms (of his "Keep"), I really was floored. Next time, I'm gonna set upt he recorder and capture their entire backstory too...ha!

Ironically, my dad is the one that wrote on my Battlemat with a dry erase marker, which turns out to be pretty permanent.

I'm struggling with getting my 9 year old daughter going in D&D. She's dying to do it and we played a solo+DM session, but I really would like her to play with a group. She's got plenty of geekly friends, but I haven't been able to sell parents on D&D. It's not opposition to it, but the parents more than anything think that D&D is too old-school and Wii and DS are what today's kids want. Arrggh!

Ironically, my dad is the one that wrote on my Battlemat with a dry erase marker, which turns out to be pretty permanent.That truly is ironic...ha! err I mean, sorry.

Ya'know there is some sorta remedy for erasing permanent-ish dry-erase marker marks on the battlemats. Never did it, but supposedly you can trace over the dry-erase with a wet-erase marker and then try to wipe it off. It may be too late though, if it was a long time ago. Anyway, you probably know, but it seems that the water based overhead projection markers by Staedtler Lumocolor is widely favored. It's what I use and they work great. Red can be a little sticky, but still good.

On the daughter playing D&D tip, I think that's freakin' cool. Great job on your part playing it with her. If a group is avail, even better, but still just you DMing her is great, IMO. Slowly you can bring in a friend or two of her's, I bet.

And those darn parents, getting in the way of kids having good ol' fashioned fun! Sure the new stuff is cool too. I love me some wii, xbox360, ps, anytime I can squeeze it in, but we can't let the old stuff die. Too much fun!

Heck, don't those folks play boardgames with their kids? For shame!

Keep up the great work with your daughter, bud.

Men,I´ve been reading your blog for a long time tonight.I found it today and Im still roaming through your posts,but this one its amazing!
D&D Core Manuals : $200
Permanent Marker : $10
Random Miniatures : $150
Watching your kids designing a happy-hero-in-shiny-armor-killing dungeon:
PRICELESS!

Bye, and hi from Argentina =D!

Hey man, thanks for the nice comments. I'm glad you enjoyed the post, and are enjoying the blog here.

I've been a little lazy as of late, on vacation for a couple weeks, but I hope to get back to posting regularly soon.

Hope to hear from ya here again.