Dinosaurs vs Undead: The Battle on the Greatroom Floor 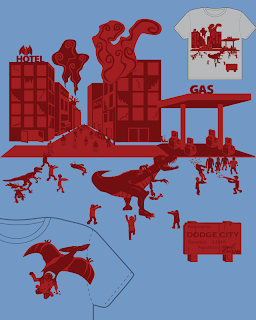 So, my son and I decided to bust out some other minis for some good ol' front room carpet battles. See I've had the "Fuzzy Heroes" and an expansion? to it called "The Lost Toys" sitting on my desk in the "office" (err... geekroom) for a while now, and have yet to actually sit down and play them. My son is 5 y.o. and the idea of taking his pile of stuffed animals and action figures and playing a cool game with them, rules and all, seems like it would be a blast. Add in the cool review I've seen of it on GeekDad, for example, and one of these days, we will play it....darn-it all!

But...on this past weekend (extended for the Easter holiday), he and I only got so far as gathering some dinosaurs from some clearance special ($1.12) at Target, a bag of 28 count dinosaurs & accessories in the "Party like Crazy!" line, which I can't seem to find online any more for a nice pic...ah well. Best I can find is this: they are basically these figs, but in a 28 count pack. 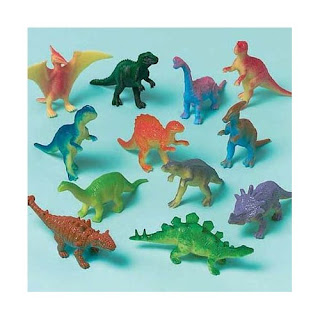 Anyway, then a different idea struck. Let's just play simple army-men type stuff, but with dinosaurs and ...hhmnn ....something else. What shall we use?

It was then that I noticed the bag o' ZOMBIES!!! (100 of those freakin' freaks! for use in the Twilight Creations game "ZOMBIES!!!") sitting there all lonely, and thought yeah, that'll do. 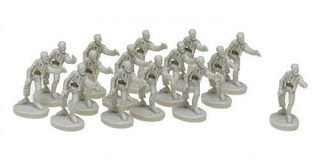 Before I forget, during my search for a cool pic to throw in at the top of this post, I found a near perfect image: this awesome t-shirt design, by a guy called Smacktastic, at threadless.com:

That's one coolass t-shirt, and I may just have to buy a couple - an XL and a 6T....ha! Anyway, awesome shirt design Smacktastic!

Well, once ya start thinking about these things, of course the geek (especially a recently 4e playing geek) comes shining through and the concepts of a boss, brute, artillery, skirmishers, artillery, etc and of course minions, take shape and now your simple army-guys game turns into a whole new animal.

But that's fun too. So we ran with it. My son has a few of the MEGA Bloks plasma minis that you can assemble, disassemble, mix&match, etc... the ones with the ball-joints at the neck, shoulders, hips, etc. So far, IIRC, he has the T-Rex, the Mummy, and the Ghoul (which is really just a winged skeleton, and just so happens to look completely badass). Well, the Ghoul fell victim to a Sword of Sharpness, or so it would seem, as his wings keep breaking off...errr ....keep getting severed at the joint, so he's still in sick-bay getting super-glued yet again. That stuff doesn't seem to be so "super" these days, that is except for when I botch the job and get some on my fingers... "skin-be-gone" is a better product name for it. 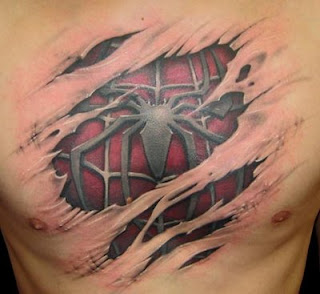 Anyway, so our choices of cool bosses for our game really sorted themselves out, and we decided on the T-Rex for him and the Mummy for me. I did let him pick, and he hilariously changed his pick 3 or 4 times, as I kept describing what types of things a T-Rex could do, and what cool powers a Mummy has, none of which we actually put into our rules...ha! But I would have loved a little Mummy Rot, Mummy's Curse, or even just some good ol' fashioned Fear....boo!

So we had out bosses and our minions: 6 zombies for me and 6 various dino for him, including the pterodactyl he chose first. I decided to give that bad boy "flight"... well as a power to use in the game, that is. But this left me at a disadvantage that we noticed in our first few minutes of play, so I took a Shadow mini from the WotC group and just called him a "Ghost" for simplicity's sake. So now I had a "flyer" too. 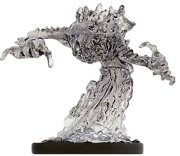 Ok, so we started out on the carpet of our greatroom/frontroom/family-room (whatever you like to call it) but those piddly little zombies kept falling over - a premonition?

So I got out a Chessex BattleMat. I recenlty snagged a backup mat, mainly because it was so cheap. It's one of their "irregular" ones, which you would really have to be pretty hardcore to really care about the irregularity of this mat. It was something like a quarter or less the "regular" price for this thing, so I figured it would be a good backup, additional, or "kids' copy" of my main BattleMat. It made sense to just grab it here and not roll with it.

So we flattened it out, as much as possible, utilizing dice cups and crates (props) from our boss minis (they come disassembled in those crates...a kinda cool concept), and started drawing our landscape battlefield. We threw on some trees that came in the bag of dinosaurs for some quick flavor and some obstacles to avoid, and made a cheesy river running thru the middle of the field with a single bridge to cross it. That looked a little weak on the choices of where to move our figs, so I made some dorky little spring-board/teleporter device to use to cross the river too. We also decided that our "flyers" could just fly over the darn thing. Makes sense. 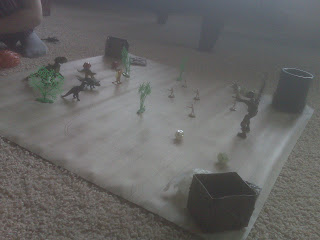 After that, we made up some pretty cool (albeit seemingly simple) rules for movement, attacks, defenses, health, etc. I will spare you those details here, as I am blabbering waaaaaay too long about a simple fighting miniatures game already. I must say though, that by the end of the game, with some modifications to the rules based on play-testing and such, I think it was a pretty cool little game we created. Don't get me wrong, it's not like we totally reengineered miniatures gaming or anything, it's just that sitting down to play army men and finishing up how we did felt like a nice little accomplishment of creativity in some manner or another.

I took some pix of the thing as it progressed, capturing our rules and changes along the way. My son said he wants me to write it all down on paper for us to use again, and I put him in charge of the artwork. I have a feeling it's gonna be freakin hilariously cool if he takes the gig....ha!

Anyway, here's a few more pics of the game as it progressed. The photo quality kinda sucks, due to the fact that I had only the camera in my phone, and it isn't very good for taking closeups...or really even far-a-ways....ha! Anyway, please bear with the pix quality. 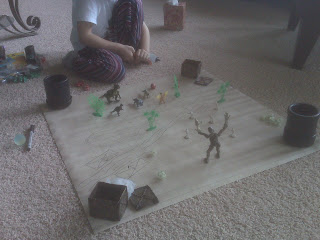 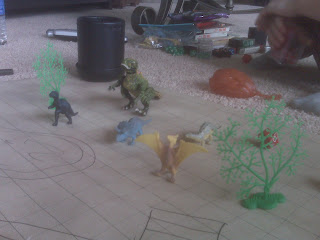 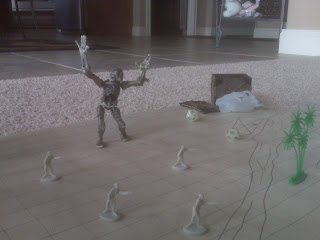 Ghost vs T-rex (not my smartest move of the day): 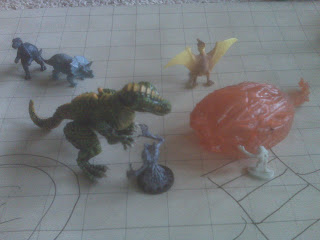 Bobby's not diggin' that "1" he just rolled: 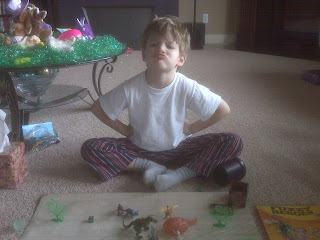 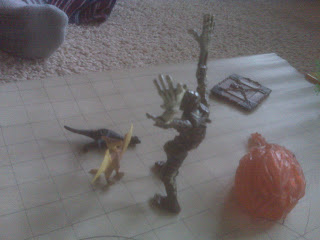 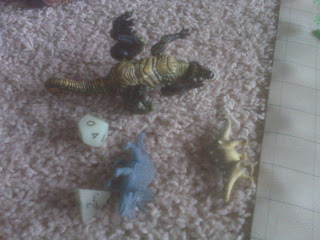 I lost to this freakin' pipsqueak? 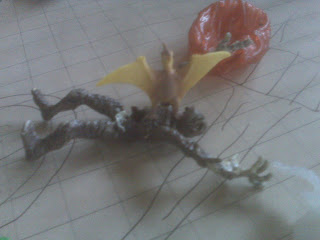 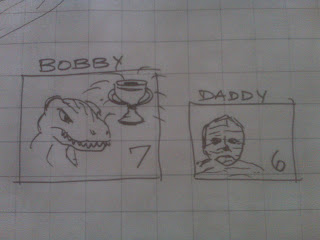 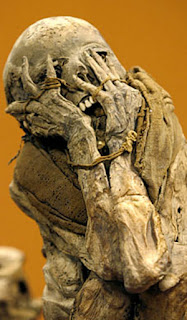 Posted by yoyorobbo at 5:09 PM

Tell ya what, when we publish this bad-boy, I'll send ya a free copy...ha!

As silly as that sounds, my son just asked me about 10 minutes ago what store will sell "our game."

It's really a silly little game, but it was good fun, and it's great to see his eyes widen when he says "our game." Fun!

Thanks for following and enjoying our silliness here, Reis. Again, nods to you for your earlier posts on playing minis and D&D with your nephews. Inspiration at it's best!

Wow! This is my first time here and I have to say I love things like this, homebrew systems etc.
Can I bring over my M.U.S.C.L.E. rubber figures and we'll see who's toughest? Undead, Dinosaurs, or Wrasslers?

@JJ:
Can I bring over my M.U.S.C.L.E. rubber figures and we'll see who's toughest? Undead, Dinosaurs, or Wrasslers?Hellz yeah! But I must warn ya, my son is a stone cold killah! And if you ever beat him, his little sister would have you calling a "do-over" on you entire week. She's absolutely ruthless!

All seriousness aside, that's the funnest part of it - totally open-ended fun. Whatever figs happen to be laying around...grab em, form an army, and see what happens.

Oh and thanks for stopping in and having a look around. There quite a bit more of the youngsters playing simplified D&D minis, and other silliness. Hope you like some of that too.

eeey this game look funny, is like play Risk or Monopoly with your child, but are you sure to put dinosaurs vs zombies. I mean men I played Dino Crisis I and II and the true is that a normal dinosaur is to hard to kill, I won't imagine a zombie T-rex, you need to establish the international Viagra Online standard rules to play this game, good luck with this.
Generic Viagra Buy Viagra.